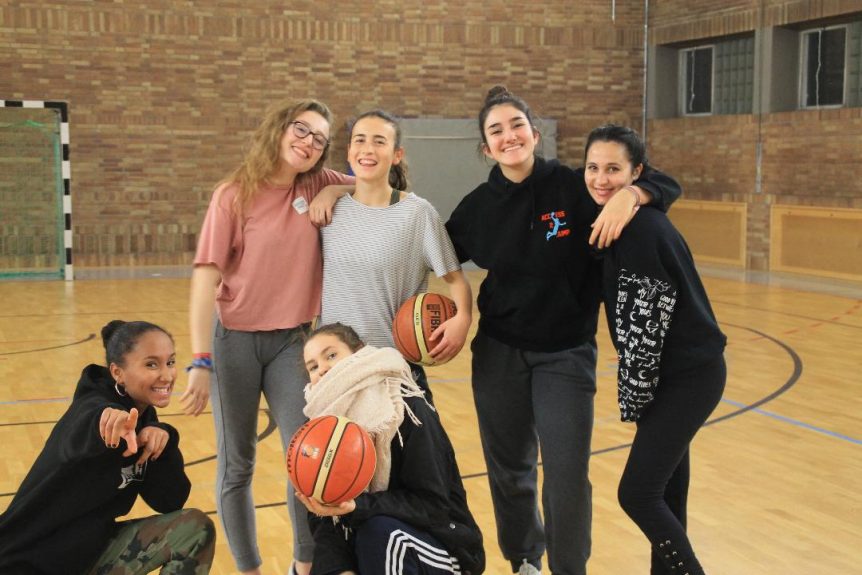 Five games five victories for the girls of MÜNCHEN BASKET U16W of coach Chiara.
This was probably the hardest game until now… although not against the best opponents!
We arrived there with the usual high motivation and a very good roster of 9 players, 11 parents 6 autos, 2 sweet cakes, 1 salty cake, cheese croissants, cokos-balls, sekt and apfelschorle 🙂
Probably because of stress due to school and a trip „early“ in the morning, we started the game undertone, letting the opponent score too easily.
Nevertheless, thanks to a good defense,  we went to the half-time pause with a +3 points.
In the interval, coach Chiara talked to her team: „Our priority is to have fun and play together as a team. Now let’s go and show Slama Jama how good we are!“
It works! In the first 5 minutes of the third quarter, the MB team dominated the game with fastbreaks and  great defense, with a partial result of 12:2, we put our hands on the game.
But the opponents did not give up and managed to come back and close the third quarter with -7. The atmosphere in the gym was tense, both coaches and refs were nervous and obviously the little ladies felt it. Last quarter was balanced, point-to-point and in the end, the key for the victory was „team-play“.
The Münchener fought against an aggressive full-court press, passing the ball fast and helping each other.
Marina (8pts) scored both free throws, bringing home the deserved 5th victory in a raw!!!
Great performance of the Playmakers Silvia (10 pts, 2x3er) and Esther (15 pts, MVP).
Now, we need to work harder for next week, when we will play against one of the favorites of the league:Staffelsee!
We need as much support as possible from our fans! So please come and cheer for us next sunday at 12:15 in DAH!
Teile mit anderen...